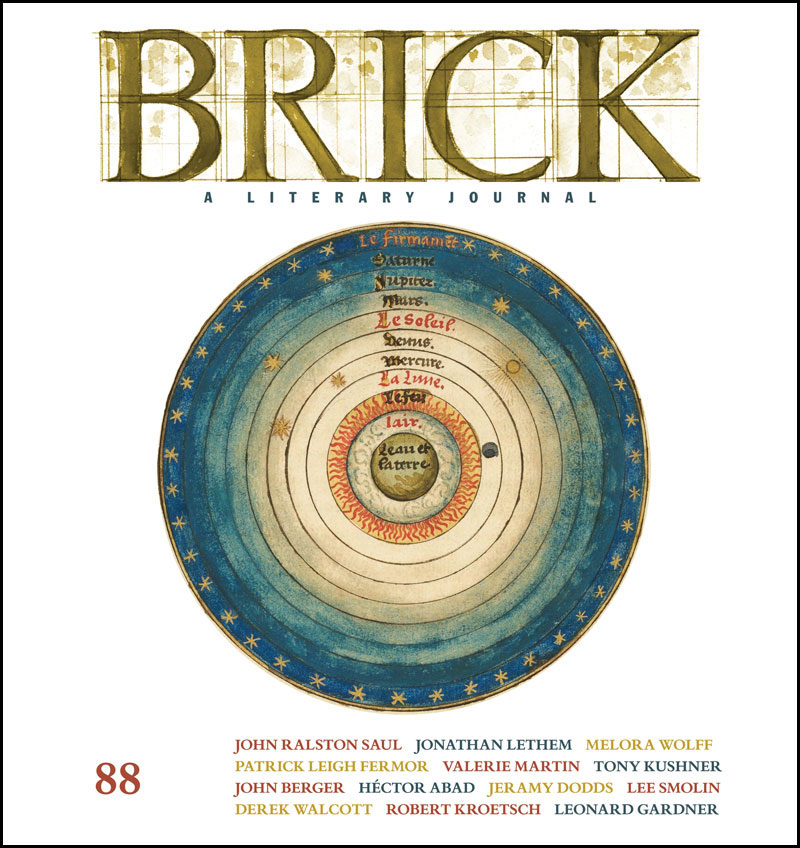 I often open Samuel Beckett’s More Pricks Than Kicks, raise it to my face, close my eyes, and inhale. The pages are as pungent as a dry old asiago. I stole the book from a guest house in Mexico. Thirty years later I’m back in that room with its coleus, its sea view, and experience again the shock of discovering six small black scorpions in the bed. When I first opened the book, sand trickled out and I saw mosquitoes pressed as flat as tiny flowers. It’s a Grove Press edition from 1972, the cover tainted with tea-coloured blooms of mildew.

On the next trip to Mexico I found Two Years Before the Mast by Richard Henry Dana Jr. The book was in worse shape than the Beckett, its spine split, its pages loose as cards, and the smell septic. It was at the very bottom of a stack on a stone-floored shop near the Alameda in Mexico City. The owner dismissed the book with a backhanded wave, meaning, Take it. Like a prisoner condemned to a long spell in a dungeon, the book had suffered such irreparable damage it wasn’t worth a peso. I bought a large manila envelope and carried the book, in its many fragments, around Mexico for the next month, its pages as brittle and crumbling as the hardtack Dana ate aboard the brig Pilgrim.

In Allahabad, India, I found Madness and Civilization: A History of Insanity in the Age of Reason by Michel Foucault. It was lying on a mat on a street. It was different from the other two books in that it was outside in the sun rather than inside in the damp confines of a shop or shelf. Its pages were stiff and rippled, and I wiped a thick coat of dirt from the cover. The price was ten rupees, or as the vendor said, Rupees ten. One dollar. The vendor was short and thick, wearing black cotton pants and a white cotton shirt buttoned at the cuffs. An excellent read, he assured me. The cover showed a left hand holding a circle from which a naked madman stared out as though from a crystal ball.

I never did finish the book, though spent many afternoons in Allahabad and, later, Mumbai and Poona, reading about French insane asylums. In spite of its exposure to the heat and dust, the book was in pretty good shape and remains so to this day. It’s not as pungent as the Beckett, though its weathered pages invite close inspection of its stock. When held to the sunlight, the finely pressed fibre puts me in mind of paper mills. I think of the stories of workers who got a hand caught between those titanic rollers and were hauled right through to come out the other side no thicker than the paper, well, that the book was printed on.

Those three books lie on the table beside my desk. Each is a different size and shape, with a distinct cover, different paper stock, and, yes, idiosyncratic smell. (Given that we speak of the body of the text, is it going too far to call it a body odour?) Each book has a story, or rather history. As objects, they are tangible, tactile, solid. Their spines creak as you open them and their pages lie as individually as a woman’s hair on a pillow. So it is with most every book.

Until recently, I’d open my copy of Franz Kafka’s Amerika and powdered milk would sift out. I carried that book in my pack for six months through the South Pacific. I also carried a box of Carnation instant milk because, at the age of twenty, I was convinced that such things as milk or toothpaste would be hard to come by. The customs official in Rarotonga thought he was on the verge of a big promotion for busting a drug mule when he peeled open that container of Nalley’s French Onion chip dip, licked his finger, and tasted not coke or smack but baking soda. How I chose Amerika for a trip through the antipodes I don’t know, but that sunburnt book still evokes the sounds and smells of the Suva market, the eighty-foot ketch on which I sailed to New Zealand, and the freighter that took me to Bora Bora.

I recall a copy of Thomas Pynchon’s Gravity’s Rainbow I packed around Japan, as dense as a brick, with a bronze cover and bible-grade paper. I recall the copy of James Joyce’s Ulysses that I bought from a street vendor in Calcutta. His shop consisted of a waist-high shelf that he shuttered and padlocked each night. I can still feel the heft of that book in my hand, the sound of the pages as I turned them, the folded rupee note secreted between pages 110 and 111.

Not that I’ve anything against e-books and Kindles. Some day I’ll likely buy one and be thoroughly impressed. But can you throw it at the cat or flatten a roach, can you hide things in it, use it as a filing system, or dribble wax onto the back cover and stick a candle on it to enhance the atmosphere of a faraway room and, in those flickering shadows, make love?

Grant Buday’s new novel, The Delusionist, is due this spring from Anvil Press.