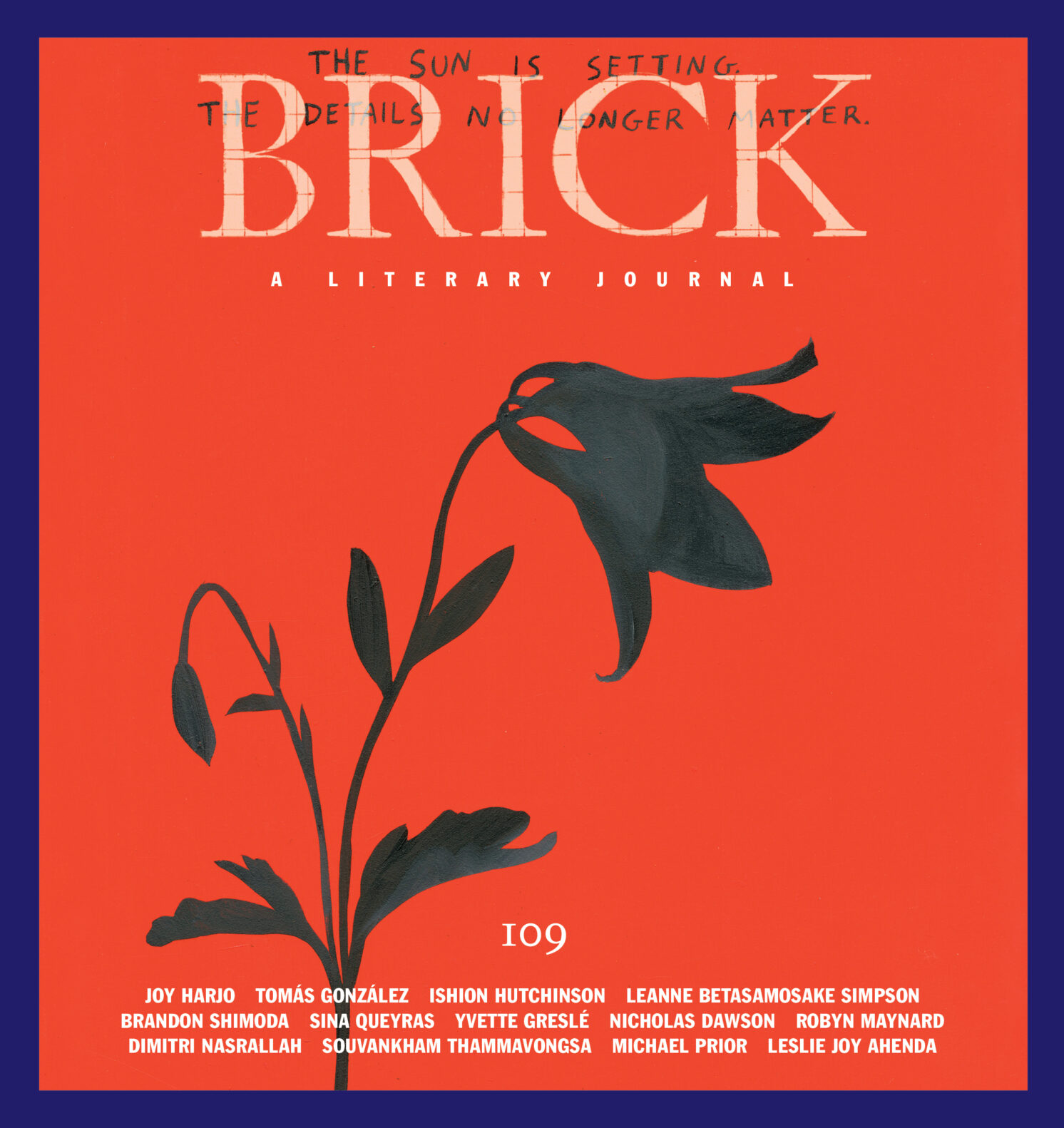 About five years ago now, I sat down with a copy of your book, As We Have Always Done. I’d planned to flip through the first few pages over my morning coffee. In the end, though, I stayed put, reading almost the whole text in one go, and was suddenly overcome with a strong feeling that I wanted to know you. Your words beckoned me to join you in what you called “constellations of co-resistance”: constellations that affirmed life and world-making in a time of acute racial violence. We spoke on the phone shortly after. I remember I was in a Subway restaurant in downtown Montreal, squatting the free Wi-Fi to do a final fact check of some op-ed I’d written. I could barely make out your voice over the very loud—and very bad—music. I don’t recall the details of what we talked about, but I know that I have wanted to chart old and new constellations with you ever since.

I’ve been meaning to write you for a long time, and yet it’s hard to know where to begin. So I guess I will start where I’m at: I can’t stop doom-scrolling the multiple crises of our time.

At this moment, I’m preoccupied and filled with dread by the reports of rising temperatures, the just-about-last chances regularly announced by climate scientists, the continually shelved fact that things must be drastically and immediately shifted if we are to avoid “untold suffering.” I’m preoccupied with what goes unwritten in so many reports, but what I know in my bones: some communities’ “untold suffering” will vastly exceed that experienced by others. Some communities have been facing “untold suffering” for multiple generations.

I don’t want to live in this preoccupation, in this dread that sometimes comes to visit me and threatens to immobilize. So I suppose this is me reaching out, simply, for a levelling of the grounds beneath my feet. For communion. To help transform the source of this dread into a place from which we can, instead, plot, conspire, dream, and attend to life, otherwise. To attend to the celebration, the preservation of life, without eliding our own communities’ intimate proximity to death and loss. Talking and thinking with you has always helped me focus on the vitality, the livingness of the traditions that our work emerges from, regardless of what the last several centuries of European atrocities have wreaked on our peoples. Our conversations are a salve against the sharp edges of everyday life. But I don’t see you as much as I would like, and the phone is not my medium. So I’ve decided to write you this letter. I’m writing you a letter even though it feels cringey because I’m shy. I’m writing you a letter even though I may never send it, even though you may never write me back.

I am writing to you a letter at the end of this world.

From Cyclone Idai in Malawi, Mozambique, and Zimbabwe to Hurricane Dorian in the Bahamas, the devastating forest fires displacing Indigenous communities from the Amazon rainforest through to the Mishkeegogamang Ojibway Nation in northwest Ontario, our respective communities—that is, Black and Indigenous communities—are collectively positioned on the very forefront of the unfolding catastrophe.

It would require a deliberate obfuscation to view the racially uneven distribution of harms that the climate collapse engenders as accidental. Even if we didn’t take into account the melting Arctic ice caps, rising sea waters, eroded shorelines, desertification, and species extinctions that are now nearly, if not totally, inevitable, the reality is that not only are an array of world-endings already before us: they have already arrived. Our respective communities have borne, already, multiple apocalypses that were inflicted upon us, if unidentically, from the “barbarity time” of genocide/slavery/settler colonialism. The apocalypse is imagined, after all, in most classic Euro-Western settler tropes, in terms of the lack of clean drinking water, the destruction of the places “we” (they) live, the poisoning of the earth, inhumane and restrictive responses to people left hungry, displaced, in desperation: this is a condition that is already deeply familiar to our kin across Turtle Island and globally.

To remix Public Enemy, “Armageddon-been-in-effect”: it is the apocalypses of slavery and settler colonialism that bind our collective pasts and presents together in the calamity at hand.

The first thing I underlined in my now worn-out copy of Policing Black Lives: State Violence in Canada from Slavery to the Present, was the very first line of the acknowledgements section: “Writing Policing Black Lives was a community affair—born out of movement work, it is geared toward nourishing those same movements that have given me life over the last years.” I knew after reading that first line that this book was going to be different. Policing Black Lives was written for different reasons than most books published in Canada. Reasons that I had profound respect for—knowledge, research, analysis, and writing born out of movement work and geared towards nourishing, sustaining, and propelling movements for Black life—robust intellectual work in service of radical Black futurities. Policing Black Lives holds up community and shines a light on the generations of freedom fighters whose individual and collective sacrifices have brought us to this moment. As I read on, I underlined your careful and gentle insistence that Black and Indigenous struggles, while distinct, were also linked. This was significant to me because it gestured towards a more rigorous and nuanced relationality between Black and Indigenous communities, reminiscent of radical Black feminist traditions embodied in so many: writers like Makeda Silvera, M. NourbeSe Philip, Dionne Brand, and Afua Cooper. In Policing Black Lives you were the first one to gather together the work of Black feminists and organizers and provide us with a volcano of meticulously researched evidence that destroyed Canadian innocence and exceptionalism with regards to transatlantic slavery and anti-Blackness. In Policing Black Lives, you taught me abolition on stolen land is the practice of caring.

You graciously accepted the invitation and our conversation took place on April 14, 2018. This was the very first time we had met in person. I remember the Black community of Montreal showing up in power at the event. I remember being very nervous, as one should be when their first encounter with someone is on a stage with a mic in front of a beautiful, intelligent audience. I remember your pink lipstick. I remember my Blistex. I remember being painfully aware I was dressed like I was from Ontario. I can’t remember very much about what we talked about, but we obviously had the sense to record it because there is an edited transcript of part of our conversation in Until We Are Free: Reflections on Black Lives Matter in Canada. This was our first visit.

Roughly a year later, in 2019, as part of my work at the Dechinta Centre for Research and Learning in Denendeh, I helped organize a solidarity gathering that took place in March, in the territory of the Yellowknives Dene First Nation (YKDFN).1 Our idea was simple—to invite a small group of Black, Brown, and Indigenous activists, thinkers, writers, and organizers to spend time with us, in the spring, on an island in what the Yellowknives Dene know as Tı˛ndeè, or “big lake.” Together we fished nets under the ice, travelled by snowmobile and sleigh across the frozen lake, shared moose ribs cooked over the fire, stories from YKDFN Elders, our own ideas, and time with each other. We wanted to invest in our relationship with each other and our affinities, outside of the institution, the internet, and crises, because we believed that the land would pull out a different set of conversations and gift us with a different way of relating. We wanted to sit together on the land, immersed in a Dene world, engage in a practice of Dene hospitality to see if we related to each other in a different way.

This is exactly what happened. The land nurtured a set of conversations and way of relating to each other outside of the institution and its formations. I remember you and I eating muskox around the fire, talking about how different eating muskox around a fire in the bush was from meeting in a hallway or bar at a conference, or interacting online. We were meeting, and there was no crisis or blockade or protest or agenda. We were coming together to nourish each other, to relate to each other, to listen and share, and to breathe together, to use NourbeSe Philip’s thinking. I could intellectualize about the experience and speak in terms of relationship building, something I think Black and Indigenous activists in the 1960s and 1970s understood far better than us. I could talk about this from an Indigenous methodological angle, with visiting and developing relationships of trust as foundational to any exchange of knowledge and experience. I could write about the spiritual dimension of this work from, again, Indigenous perspectives—being surrounded by trees, medicines, air, sky, and water. In a sense, though, none of that particularly matters, other than to say, I think land-based politics “grounded in a sustained and nurturing relationship with the natural world and in protecting nature as a means of protecting ourselves” can be one generative means of nourishing Black and Indigenous politics of solidarity.

Our starting point was simple: land and place-making, although perhaps different, were and remain important to both Black and Indigenous peoples.

Our starting point was a refusal of the nation-state and racial capitalism, colonialism, and heteropatriarchy embodied in those structures.

Our starting point was a recognition that transatlantic slavery and, as Saidiya Hartman says, “its afterlives” in colonialism, mean we have distinctive and intertwined histories, presences, theory, and world-building practices.

After that gathering, the possibilities to continue this work seemed endless: trips to the sugar bush, hikes in downtown Toronto, exchanges between Freedom Schools,2 gatherings in the Caribbean . . . and then the pandemic hit.

Our lives shrunk into our home-spaces during stay-at-home orders. There was an urgency in addressing the pandemic under white supremacy because we knew that Black, Brown, and Indigenous peoples are always the first to die, and that any state solutions will be made first to save white people’s lives and livelihoods.

Zoom seemed like the very last place we wanted to continue this work. In fact, to me, it felt like virtual environments were antithetical to this work. And so, you and I decided to write each other letters because we couldn’t see each other in person. As an honoured radical Black feminist methodology of scaffolding the intimate and personal within the global, letter writing made sense.3 We decided to not only write what we know, but to attempt to think through things together, to generate through this intentional relationship a sort of study of Black and Indigenous relationality through the study of our own responsive relationality. In hindsight, and after reading Katherine McKittrick’s Dear Science and Other Stories, I realize that each of us drew on our distinct “rebellious methodologies” in this project—for you, Black theory, story, knowledge, and methodologies of knowledge production; for me, Nishnaabeg story as theory, knowledge, and methodologies of knowledge production. The intersection was friendship, collaboration, song, story, movement work, citations, analytics, and oral practice.

1 Kelsey Wrightson and Glen Coulthard were the other organizers, along with Dechinta staff.

2 Present at the gathering were LeRoi Newbold and Nauoda Robinson, cofounders of Freedom School Toronto, and Tasha Spillet-Sumner, an organizer with Red Rising Freedom School in Winnipeg, M.B.

Robyn Maynard is an author and scholar based in Toronto. She is the author of Policing Black Lives and the coauthor of Rehearsals for Living.

Leanne Betasamosake Simpson is a Michi Saagiig Nishnaabeg scholar, writer, musician, and member of Alderville First Nation. She is the author of seven previous books, including A Short History of the Blockade and the novel Noopiming: The Cure for White Ladies.