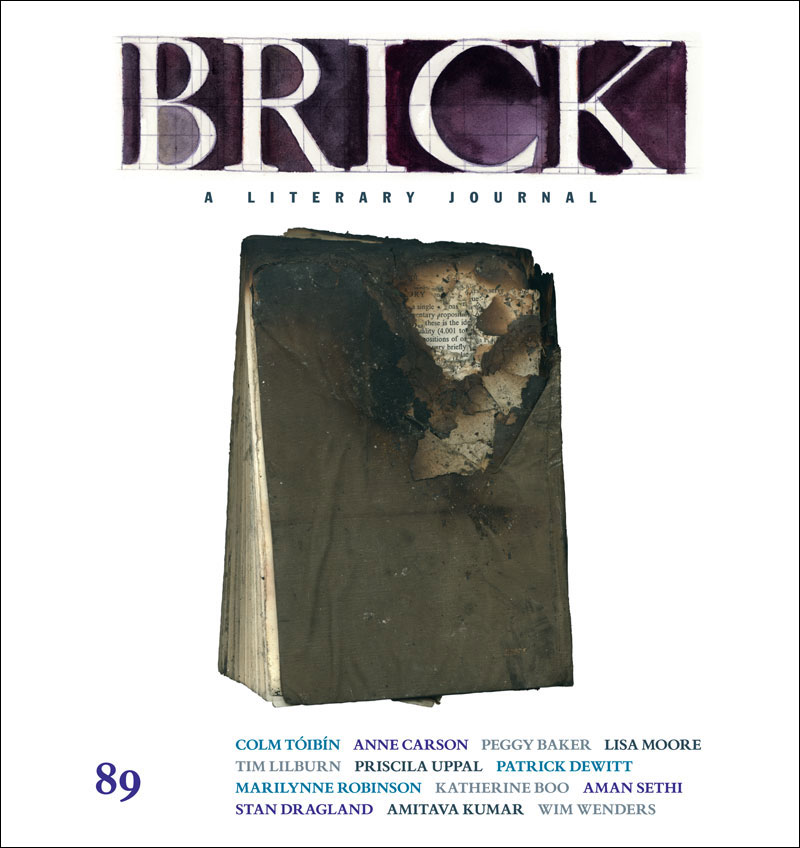 The announcement of Mac Jamieson’s recent death brought memories of my 1970s involvement with Mac and his wife, Jill, and Mike Niederman, all of Applegarth Follies in London, Ontario, and the birth of Brick, a journal of reviews, forerunner of Brick magazine as it is today.

Mac was teaching philosophy for the integrated studies program at the University of Waterloo, part-time I think, when he and the others, including Hilary Bates at first, founded the Follies. Their impressive plans included publication of a literary magazine, Applegarth’s Folly, as well as books, mainly by London and area writers. Eventually, there was to be a scholarly magazine. Mac and Jill were editors and administrators of the house, Mike was designer and printer on Applegarth’s own presses.

In the first and second numbers of the magazine, Mac published Parts 1 and 2 of his to-be-continued essay on the work of John Glassco. Mac and I shared an interest in Glassco, and that, with my expressed support of what the Follies were up to, may have been what brought an invitation to become review editor of the magazine. Somewhere in there I must also have said that I was not impressed with the state of reviewing in the country. Reviews first appeared in the second number, “City Mothers,” 1975. The free-standing Brick first came out in 1977.

I tried googling Mac to see if I could find out what he’d been up to since leaving London. I found almost nothing, other than a fascinating piece on his London connection with Margaret Avison. Mac may have wished to leave few tracks. There was a slightly superior privacy about him, a withholding—of his music, for instance. Mac was a pianist and a composer of what he called three-dimensional music. I remember him trying to explain it to me in the Hyman Street house where he and Jill first lived. I might have got the concept had he played something for me, but he said he had stopped performing. That same evening he introduced me to a recording of Slam Stewart, the bassist who hums the line he plays. I got that and I’ve kept it.

Mac did play for Margaret Avison. She was as reluctant to publish in those days as Mac was to play, so he swapped some music for a poem to go into Applegarth’s Folly. Margaret was Western’s writer-in-residence at the time. She told me that Mac’s talk and his pianism had made her understand twelve-tone music for the first time. You played for Margaret, I said to him not long thereafter (we were still friends), but you won’t play for me. For you, he said, I will, but the opportunity never came. Mac did play with me one time. This was in Mac and Jill’s second house, on lower Wellington Street. I’d helped them move to that lesser abode in the less attractive neighbourhood. (After the move Mac missed some books out of his extensive pornography collection and had me fingered as the culprit before they eventually turned up.) Robert Kroetsch was in town, probably on the occasion of the release of The Ledger. I don’t now know why that meant I should bring my guitar to the house, but I did, and Mac was not able to resist adding some keys to a bit of blues.

If Applegarth Follies had done nothing other than publish The Ledger, the first long poem in the series that became Kroetsch’s Field Notes, they would have earned a place of note in Canadian letters. That poem was going nowhere until it came to the Follies, which also published Don McKay’s second book, Long Sault. A third, Lependu, was accepted but would have been lost in the shuffle had I not by then tentatively established the forerunner of Brick Books. Colleen Thibaudeau’s Ten Letters, the first chapbook I published, was printed offset by Mike Niederman at Applegarth Follies. I had set the text in the Baskerville type donated by James Reaney to The Belial Press at the university after he completed his ten-year run of Alphabet. One of Applegarth’s presses was the old foot-pumped jobber on which Reaney had printed his magazine. There was plenty of literary interconnection in London back then.

Joshua Applegarth was the first settler in the area that became London. His folly, according to the publishers who appropriated his name, was to leave town. Well, Joshua took off because he felt like it; Mac and Jill were forced out of town by financial ruin. I don’t know the ins and outs of that, but I think the purchase of printing equipment and the rental of premises was never offset by income. The second issue of Brick, edited by Jean McKay, was in preparation just as Applegarth Follies was descending into chaos. Brick was the only thing rescued from the enterprise, and it took some doing because Mac and Jill and Mike felt betrayed by the community, including Don McKay and myself, whose support they had counted on. The last bitter argument we all had was about Canada Council funding. Applegarth was resolutely opposed to it.

It was sad to watch the decline of the Follies, and it was annoying to be guilted for volunteering to save only Brick, the part of the operation that meant the most to me. I had known Mac Jamieson, not well, for a few years only. I was fascinated by the man, and I was caught up for a while in a brave Jamieson idealism that turned out to be impossible to sustain. If the community is to be your support, best not alienate your community. Finally, I became disenchanted. But I acknowledge with gratitude the legacy of Applegarth Follies. There would have been no Brick magazine but for Mac and Jill. It’s strange to think that the people who affect you most in life are not always those you agree with or even like.

Within a letter sent to me on the sixteenth of May, 1973, Margaret Avison wrote: “A timeless quality was in the occasion last night, and forever is not out of the question. It was only partial receiving I could do. But I could hear that forever is for hearing too. . . .”

In that letter Margaret Avison is referring to the previous evening’s private recital that I gave for her and her London, Ontario, friend Louise Wyatt. It was to be the first of two performances I was to give; the second occurred on a Sunday evening the twenty-seventh of May, 1973, and her guest that night was her American friend and fellow poet and editor Frederick Bock. Even though I continue to compose and play, these two performances were, as they were meant to be, my last public appearances. Still, like all memories and forgettings, these did not begin and end just there.

In a way their first embarkation occurred during the bitterly cold January of 1973 in London, Ontario, when the two of us had begun what was for me a momentous series of conversations on silence and the desire to be silent. I had contacted Margaret Avison at the University of Western Ontario where she was serving as one of those strangely indentured individuals to both the Canada Council and the English Department, called “writer in residence.” I had hoped for a submission from her for a magazine that I was publishing and co-editing. “No” was her immediate response the absolute minute I walked into her office deep within what Michael Ondaatje was to refer to as “the corridors of the Paradise Lost Motel,” frequented by “grey flecked university rats,” namely the infamous University College of the University of Western Ontario. She then continued in that uniquely soft yet chillingly precise voice of hers to proclaim: “Poetry is my language, but I’ve lost my style.” She referred to the dismaying fact that it had taken ten years for her first book, Winter Sun, to be accepted for publication. She went on to say that fourteen years of doing hack writing and prose, ghost writing and freelancing, had essentially destroyed her expressive powers. I in turn told her how years of playing on the road, studio work, and especially as a solo piano accompaniment to strippers in bars, had virtually cut me off from ever wishing to perform in public. I talked about Mompou, Satie, Rebikov, and Ravel; and of their works dealing with the spatial quality of music, of silence, and layered articulations of time. At that moment I was very interested in the “Musica Callada” of the Catalan composer Federico Mompou who had written in French in his notes to the first set of pieces in that series:

It is rather difficult to translate and to express the real meaning of “musica callada” in any language other than Spanish. The great mystic poet, San Juan de la Cruz, in one of his fine poems, sings of “ La Musica Callada, la Soledad Sonare,” in an endeavour to express the idea of music that was the very sound of silence. Music keeps its voice silent, that is, does not speak, while solitude has its own music.

Our talks continued through the months and culminated in a discussion of Dostoevsky’s statement in The Idiot that the moment you begin telling something you stop being a philosopher. Margaret talked of Being and its non-speaking. (Sadly even at this much later date Margaret Avison is still profoundly under-appreciated for the religious and philosophical dimensions of her work).

Margaret Avison is a poet of the marvellous and very much what Martin Heidegger speaks to when he argues that the poet is to name what he has experienced as holy.

But we never get to know a mystery by unveiling or analyzing it; we only get to know it by carefully guarding the mystery as mystery. But how can it be carefully guarded—this mystery of proximity—without even being known? For the sake of this knowledge there must always be another who comes home for the first time and tells of the mystery.

In this manner we proceeded as accomplices of silence and we both came to a possible intermediate solution to our talks and our existential quandaries. At least that is how I now recall the events leading up to her phoning me on the twenty-third of February, 1973, and proposing that if I were willing to give her a performance of my work and that of the composers we had discussed that she would write in exchange a poem for my magazine. It was truly an interesting checkmate to my original request; our pain was to be mutual.

—Whether to blast the last outrage of silence

Or bless the leap of shadows at our knees—

What’s to his discredit but our wonder?

Admittedly the above lines, from “The Outrage of the Shining Hands” and found in Frederick Bock’s The Fountains of Regardlessness, catch a good deal of how I feel now; but such was not the case on those two nights in May 1973. It all came together then: the music, the poetry, the silence, and the circle dance. I performed a version of my work based on a non-existent poem by John Glassco; and on the Tuesday Satie’s “Oeuvres mystiques” and on the Bock Sunday Mompou’s “Musica Callada.” And in return Margaret Avision wrote “March Morning in London Ontario.”

Stan Dragland lives in St. John’s, Newfoundland. His most recent book is a novel, The Drowned Lands, from Pedlar Press. Along with Jean McKay, he was the founder of Brick.

Mac Jamieson was a writer, teacher, musician, and co-creator of Applegarth Follies, a London, Ontario, publishing collective, which begat Brick, a journal of reviews, which begat the magazine you hold in your hands. Jamieson died earlier this year in Ottawa.